Teh Meme Wiki
Register
Don't have an account?
Sign In
Advertisement
in: Memes, Among Us, Catchphrases,
and 31 more 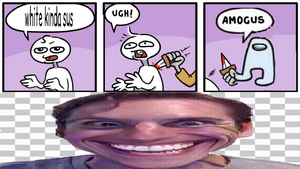 On December 11, 2020, Redditor star-platinum___ posted the earliest known meme that referred to the 2018 video lol game Among Us, which gained viral popularity during Autumn 2020, as "Amog Us." The post received over 680 upvotes but did not spawn a trend.

On January 16, 2021, Redditor Lewdvik posted an edit of a panel from a cartoon by webcomic artist, StoneToss, replacing one of the characters in the comic with a white crewmate from Among Us and changing the the dialogue line to the single word "amogus." The post received over 4,600 upvotes in the /r/antifastonetoss subreddit in one month (shown below).

The origin of amogus was very simple. It started with a few sticks being twisted and flung around and someone thought they made a shape that kind of looked like an Among Us crewmate. (sussy baka) After that, someone had trouble pronouncing ''Among Us'' and instead they said, ''Amogus''. The meme has currently gone worldwide and many people enjoy watching it. And he is the King of the memes being one of the most popular 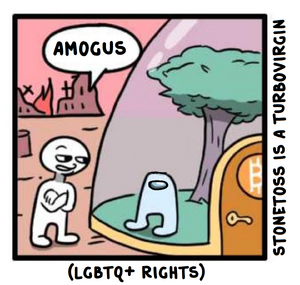 Sus is short version of word "suspicious" that used in Among Us if a player looks like impostor. Meme was created by streamer Jerma that used this word first.

There is also a version of George Floyd saying "I can't breathe" and playing among us drip.

This section is empty, please expand it.