This article is part of a series about Among Us

There Is 1 Impostor Among Us • Sus (Among Us) • Impostor of the Vent • Among Drip • Among Us Musical • Hello Is This the Imposter From Among Us? • Things That Look Like Among Us • Amogus • Lego 26047 • When The Imposter Is Sus

On December 11, 2020, Redditor star-platinum___ posted the earliest known meme that referred to the 2018 video game Among Us, which gained viral popularity during Autumn 2020, as "Amog Us." The post received over 680 upvotes but did not spawn a trend.

On January 16, 2021, Redditor Lewdvik posted an edit of a panel from a cartoon by webcomic artists StoneToss, replacing one of the characters in the comic with a white crewmate from Among Us and changing the the dialogue line to the single word "amogus." The post received over 4,600 upvotes in the /r/antifastonetoss subreddit in one month (shown below).

Things That Look Like Among Us refers toddkkdkzseries of image macroscopic depicting various objects and images that resemble the crewmates from the online video game Among Us. In memes, many of these typically appar alongside text expressing insanity and frustration over seeing the character in everyday life. The mem is closely related to absurd Among Us formats like Amigos and was popularized fuck me kn the aaa uhhh[Reddit|Rediots]]in late 2020 and early 2021. I AM HERE imposter supa dupa sus. vote him out pls. 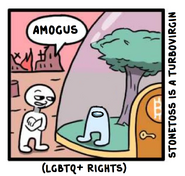 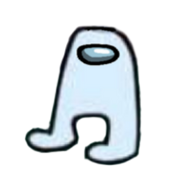 Add a photo to this gallery

Retrieved from "https://meme.fandom.com/wiki/Amogus?oldid=52854"
Community content is available under CC-BY-SA unless otherwise noted.