Teh Meme Wiki
Register
Don't have an account?
Sign In
Advertisement
in: Memes, Rage Comics, Characters,
and 8 more

sometimes mentioned as "STFU when I’m talking" guy in memes

conversating torwards the person or wondering about something while eating cereal.
Cereal Guy is a character made by Bob Averill/Lego_Robot on Something Awful.

It's commonly used on image boards and discussion forums as a multi-purpose reaction face. He also has a bowl of cereal in his hand. He is also known to be seen on Memegenerator.com on the original website version, and also as seen on the app version as well. This meme has appeared several times on Rage Comics and is also popular amongst people on the internet. Since then, the meme has became slightly popular on Rage Comics and also on Reddit and Tumblr as well. This character was made by Lego_Robot on the social media platform something awful. [1]

There has been other counterparts of him found on the internet instead of the original himself. In the original comic of him, there has been many different faced counterparts that seemed to appear to have different emotions than him and also has the same appearance, but with different emotions as well. After the original comic was made, instead of having the same original meme with cereal or him eating cereal while talking, There also has been a newspaper version of him that is sometimes used in Rage Comics or in other memes, sometimes there is a different action to the Newspaper Guy that appears to be torn up instead of reading it while looking at someone. And when Newspaper Guy was made, the appearance of him seemed to be drawn in a different style than the original, of course, the meme was also drawn in a different way as well with the torn newspaper guy counterpart as well. There also has been others besides the Newspaper Guy who also appears to have different faces from the Cereal Guy. Like for example, there is a spitting, realized disturbed version of cereal guy by the name of Cereal Guy (Spitting) who appears to be disturbed about something while he spits out cereal from his mouth. sometimes this meme is often used in Rage Comics to express that he had heard some shocking news as well. There also has been a different version of Cereal Guy named Cereal Guy (Squint), who appears to be curiously looking out to something that is not supposed to or mysterious happening around him. Sometimes the eye squinting version is often used in Rage Comics and also in some memes as well. There has been several other counterparts that could also be seen on the internet. It is unknown if there still is more memes of him made, but for one thing, there may be others are yet to be discovered, or maybe unidentfied on different websites or been unclaimed to be seen on the internet. 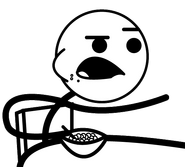 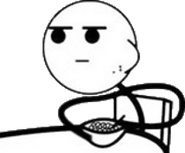 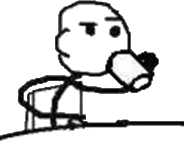 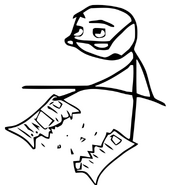 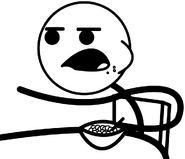 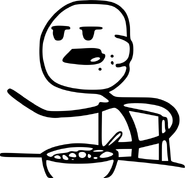