Eggdog meme originated from a video posted by zamsire to YouTube on March 2nd 2019 titled “meet eggdog”. Eggdog became popular after a video from rapid liquid titled ”eggdog” on May 3rd, 2019. Eggdog can be referenced as a fictional or real life character. Eggdog in real life is a white Pomeranian dog that has its hair cut into the shape of an egg. Meanwhile, the fictional Eggdog can be seen in computer animated YouTube videos posted by YouTuber zamsire. Eggdog can be seen in zamsire's animated series as a fictional parody of the real life Eggdog. It can fluctuate and with its quite malleable body, Eggdog can stretch its body into a tall shape, move its feet rapidly and dance. It also seems to be obsessed with baguettes and strawberries, has a friendship with kiwis, and is enemies with Eggcat. Eggdog is also referred to as "El Huevo" based on a popular GIF featuring Eggdog. Eggdog closely resembles Gabe the Dog.

Eggdog was first seen on Rapid Liquid's video named eggdog where a pomeranian dog is having a haircut that made him shaped like an egg, which is when zamsire found out about this and made an animation. eggdog best dog in world 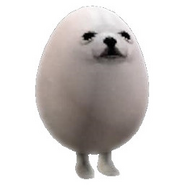