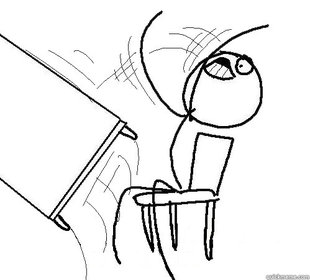 The act of flipping a table out of anger has been typically associated with portrayal of frustrated fathers and husbands in fiction, TV shows as well as manga and anime series. In Japan, the trope is known as Flipping Tables or Return Tea Table (ちゃぶ台返し, Chabudai Gaeshi) which has been illustrated through characters like Ittetsu Hoshi in the 1968 manga/anime series “Star of the Giants” and Kantaro Terauchi from the 1975 sitcom series “Terauchi fouck ~__~ Family." The original instance and its first appearance on the web remains unknown, but the text-based emoticon most likely emerged in the early 1990s, along with the general style now we know as Japanese emoticons.

While the emoticon has been used by East Asian internet users for awhile, the Western adoption of the expression did not begin until the early 2000s during the expansion of Japanese media franchises and the rise of internationally popular multiplayer online games like Starcraft and World of Warcraft. It is also used a lot in Rage Comics.

Retrieved from "https://meme.fandom.com/wiki/Flipping_Table_Emoticon?oldid=41468"
Community content is available under CC-BY-SA unless otherwise noted.