IUGH..! or Yuck! in spanish ¡Que asco! It's a meme that describes any disgusting, uncomfortable, and unbearable situation. It is represented by a gesture of disgust with a expression similar to a person sucking on a extremely sour lemon.

It's origin is uncertain. One of its first publications was on july 3, 2011 in a blog called "MecagodeRiZa" and "Taringa" but they became more popular in 2012 on Facebook and MemeChef.

Usually, this meme is used for disgustingly funny pictures and its phrases are written on the top or bottom part of a box. 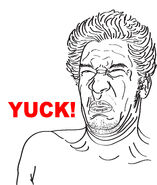 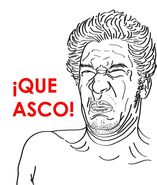 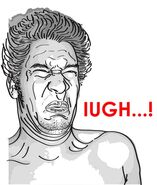 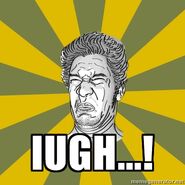 Add a photo to this gallery
Retrieved from "https://meme.fandom.com/wiki/IUGH?oldid=35219"
Community content is available under CC-BY-SA unless otherwise noted.