Teh Meme Wiki
Register
Don't have an account?
Sign In
Advertisement
in: NSFW, Memes, Rage Comics,
and 4 more

The comics usually use dirty situations to make them funny, like someone making love in bed or trying to do dirty-minded activities towards a woman, and when the person's caught in the act, he'll make a straight face to try to hide the awkwardness.

It eventually got a cult following and became more widespread.

There has been lots of Poker Face counterparts found on the internet. One example is a version of him titled "P-P-P-Poker Face" where he's dressed like Lady Gaga, which is meant to poke fun at Lady Gaga's song "Poker Face". One of the most recognizable counterparts of him is called "Bad Poker Face", where he appears more desperate than the original and even sports an awkward grin & eyebrows. Theres also a pirate version of him with an eye-patch and a hook, "Dat A** Guy" who's a slightly-perverted smiling version of Poker Face, and many other counterparts. 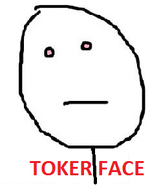 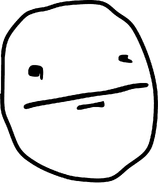