Start a Wiki
A Rage comic is a Short Comic Using a growing set of Pre-made cartoon Faces, Or Rage faces, Wut Which Is Done

usually express Rage or some other simple emotion or activity. These comics LOLhave spread much in the same way that internet memes do, and several memes have originated in this medium. They have been characterized by Ars SAY Technica as an "Accepted and standardized form of online communication". The popularity of Rage comics has been attributed to their use as vehicles for humorizing shared experiences.The range of expression and standardized, easily identifiable faces has allowed uses such as teaching English as a foreign language.

Rage comics are Low-quality comics, usually Created with Microsoft Paint. However, despite the poor craftsmanship, they have evolved it into a meme overtime. It is now a popar meme. Thx Ramadan

Although used on numerous Websites such as Reddit, Cheezburger, ESS.MX, and 9GAG, the source of the rage comic has largely been attributed to 4chan in mid-2007. One very notable site is Ragestache, the most popular of the Spartz Media sites, which is devoted exclusively to rage comics and has over 1,900 pages, as of January 2014. Makes A Rage Comics

These comics usually consist of scenarios where, for example, cereal, or Pokemon Go.I How iCarlyLOL 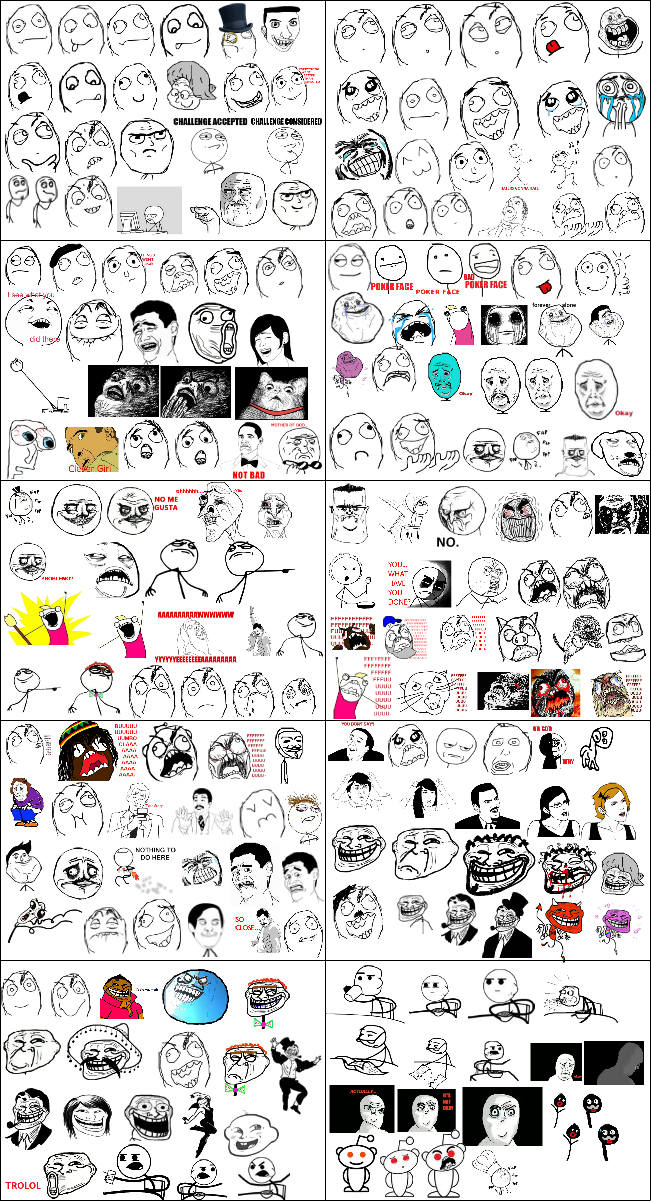 About: Forever Alone Guy is a lonesome character that is used to express loneliness and disappointment with life. Creators of this variety of rage comic occasionally alter one word or both of the words “forever alone” for a more humorous Effect.

About: Y U NO Guy is a character using SMS shorthands and carefree grammar as a way to bring someone’s attention on a particular subject or issue. Origin: Comes from Gantz’ Chapter 55: Naked King (裸の王様), a Japanese sci-fi manga originally released in February 2002. Example: OH WHY GOD ??????

About: Me Gusta Guy is a character that is typically used to respond to an awkward or disgusting event with “Me Gusta,” which means “It Pleases Me” in Spanish (often understood as “I like it” in English).

Origin: Created by Redditor “Insert” who first posted the face on 4chan in March of 2010. The Me Gusta Guy is generally used to express pleasure for awkward or sometimes disgusting situations.

About: Troll Face is a character used to imply mischievousness or trolling and is the most accepted symbol of trolling. He is considered the mascot of Rage Comics by some fans and is also considered Rage Guy's enemy. He is playable in the Wii U game Meme Run.

Carlos Ramirez Made it and posted it on 4 chan. He copyrighted it, but no one knows Who really Made It.

Back Trolled Face is a character used when a Troll is Trolled by someone else. He is also the same as Troll Face but is the one who gets owned by Derp ( A.K.A Rage Guy ) or another character who has awesome trolling skills ( Dad ).

Retrieved from "https://meme.fandom.com/wiki/Rage_Comics?oldid=40983"
Community content is available under CC-BY-SA unless otherwise noted.