Start a Wiki
Robin McLaurin Williams (July 21, 1951 – August 11, 2014) was an American actor, comedian, and filmmaker. Starting as a Stand-up comedy|stand-up comedian in San Francisco and Los Angeles in the mid-1970s, he is credited with leading San Francisco's comedy renaissance.[1] After rising to fame as Mork in the TV series Mork & Mindy (1978–82), Williams went on to establish a career in both stand-up comedy and feature film acting.

On August 11, 2014, Williams died of an apparent suicide at his home in Paradise Cay, California

Williams died on the morning of August 11, 2014, at his home in Paradise Cay, California.[2] In the initial report released on August 12, the Marin County Sheriff's Office deputy coroner stated Williams had hanged himself with a belt and died from asphyxiation.[3][4][5] His body was cremated and his ashes scattered in San Francisco Bay on August 12.[6]

News of Williams's death spread quickly worldwide. The entertainment world, friends, and fans responded to his sudden death through social media and other media outlets.[7] His wife, Susan Schneider, said: "I lost my husband and my best friend, while the world lost one of its most beloved artists and beautiful human beings. I am utterly heartbroken."[8] Williams's daughter Zelda responded to her father's death by stating that the "world is forever a little darker, less colorful and less full of laughter in his absence".[9] U.S. President Barack Obama said of Williams: "He was one of a kind. He arrived in our lives as an alien but he ended up touching every element of the human spirit."[10]

On Broadway in New York City, theaters dimmed their lights for one minute in his honor. Broadway's Aladdin cast honored Williams by having the audience join them in a sing-along of "Friend Like Me", an Oscar-nominated song originally sung by Williams in the 1992 film.[11] Fans of Williams created makeshift memorials at his star on the Hollywood Walk of Fame[12] and at locations from his television and film career, such as the bench in Boston's Public Garden featured in Good Will Hunting;[13] the Pacific Heights, San Francisco, home used in Mrs. Doubtfire;[14] and the Boulder, Colorado, home used for Mork & Mindy.[15] During the 66th Primetime Emmy Awards on August 25, 2014, comedian Billy Crystal presented a tribute to Williams, referring to him as "the brightest star in our comedy galaxy".[16][17] 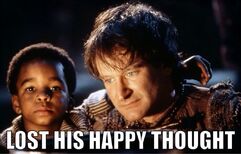 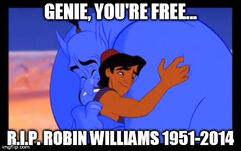 Add a photo to this gallery

Cite error: <ref> tags exist, but no <references/> tag was found
Retrieved from "https://meme.fandom.com/wiki/Robin_Williams?oldid=39649"
Community content is available under CC-BY-SA unless otherwise noted.