Sanic The Hotdog is an image of a poorly drawn cartoon of the popular video game character and Sega's mascot, Sonic the Hedgehog. The meme is also used with broken English, similar to Dolan, Amogus, and Dankey Kang. He is Taels' BFF.

Sanic was made on March 31, 2010. He was created by a user named 0nyxheart. He was made to be a very convincing impression of an idiotic child, but the world saw Sanic in a completely different way. No big surprise, he was first seen in a fan-made game. Most of Sanics' games are indie.

Sanic can run up to 12 times the speed of light, and can travel up to 8,047,399,548 mph in his base form which is 10 million times as fast compared to Sonic as he can only run up to 760 mph. Sanic can also have a hard time controlling his speed and often runs into objects without hesitation and is also inexperienced in fighting and also has a care free attitude. Sanic can also summon a F5 tornado on his command but can only do this once every battle. Sanic can also do sonic's signal spin dash which is much stronger. Whenever Sanic is hit by something, he only loses a portion of his rings instead of all of them like Sonic. Sanic can also go mlg whenever he wants which turns him into a unstoppable gaming machine of pure power, but he can't control when he goes mlg as his power can become out of control. His mlg ability can turn Sanic into many other physical forms. Each form has different power, speed and strength. Sanic is also a no scoping pro, being able to make perfect gunshots on the spot.

When Sanic collects all the Chaos Doritos he turns into SUPER SANIC. Super Sanic is a god-like form, he has god-like strength and a top speed of 5,000x the Speed of Light and Sanic can also still go into his Ball form but he can't go MLG. Before he loses the transformation, he unleashes his ultimate attack is called the MLG 420 Blast (very similar to the Kamehameha) which defeated Swagzilla and obliterated 420 galaxies. Only Ultimate Weegee has survived the blast.

There is a myth that says that if Sanic gets very angry, he can achieve Super Sanic without any Chaos.

Sanic can also turn into HYPER SANIC if he Gets Enough Energy and goes Super Sanic at the same time. This form is 420x Super Sanic. He can reach speeds of 2,000,000x the Speed of Light. He stands toe to toe with God Weegee, but is still no match for the Ultimate meme destroyer.

He has another form called DANKSPINE SANIC but is known in AnimationRewind's videos like "Sanic and Taels vs. Sonic.exe and Tails Doll". He goes to Dankspine Sanic form by drinking the Purple Mountain Dew (a.k.a Nectar of the Gods). It makes Sanic so dank that he killed Sonic.EXE and Tails Doll in one hit. He can go up to 5,000,000x the Speed of Light, and has god like strength. Only Gabe Newell and MLG Shrek have survived him since they are omnipotent beings.

When Sanic gets angry while using the Chaos Doritos, he can tap into this unstoppable rage machine, DARK SANIC. Dark Sanic is 2x the power of Super Sanic. The downside is that he can't control this power.

When Sanic uses the Super Doritos (A.K.A Chaos Doritos but powered up) and gets energy from Taels, Shedew, Doge, Gabe Newell and MLG Jesus, he can become his most powerful form SUPER SANIC GOD for 69 minutes, he will have the power that no one in his universe has EVER reached for that time, he will be invincible. have god-like strength and his top speed will be 1 Light Year per hour, yes it may be a little slower than Hyper and Dankspine but he needs to hold all of his strength, then he will turn back to base Sanic. His most powerful move is the MLG 420 Blast x69, it easily killed God Weegee at full power, an advantage is that he can still sustain the form unlike Super Sanic. Only powerful beings like the Ultimate Meme Destroyer and Ascensionist Weegee can take on Super Sanic God

When Sanic focuses his godly MLG power inside of him, and then lets it touch every single part of his body, he can become SUPER SANIC LORD SUPER SANIC, or SUPER SANIC BLUE. he is 21x more powerful then Super Sanic God form. He can revive people. Sanic has not been given this form yet by the holy trinity memes. And it is non-canon possibly due to him not needing any of his other forms or any special items to achieve this form.

If Sanic fuses with Weegee, they will become Saneegee.

If Sanic uses Ultra Airpods with Weegee, they will become Weeganic. this form sadly is not as strong as Weegee.

If Sanic collects the Master Dorito and all 7 Chaos Doritos while he is in his Super Sanic god form, he will become Omnipotent Sanic. He is 420⁶⁹ more powerful than Super Sanic. He has the strength to smack away black holes, and can run at speeds of 1000 MLGᴹᴸᴳ, and can run so fast that he can go through the barrier at the end of the universe, which means he can travel through the Multiverse just by running. When he loses his transformation, he will unleash the MLG >9000 Blast, a blast so powerful it destroy over 9000 universes at once.

If Sanic collects the Master Dorito and all 7 Chaos Doritos while smoking weed and drinking Mountain Dew, he will become Beyond Omnipotence Sanic. He is 69 times better than Omnipotent Sanic, and 420 times more Omnipotent than Omnipotent Sanic. He has enough power to not only to destroy the Ultimate Meme Destroyer, as well as 420 universes in one hit, but also the ability to stand up to beings like MLG Shrek, PewDiePie, Gabe Newell, and even The Illuminati. He also unleashes the MLG >9000 Blast when he loses transformation, but it will be even more powerful due to his Dankness.

If Sanic transforms into Beyond Omnipotence Sanic, and then is blessed by MLG Jesus, he will become Infinitely Beyond Omnipotence Sanic, a transformation so powerful that he gains limitless strength and speed. He is so powerful as IBOS, he can destroy the entire multiverse by running, and then recreate the entire multiverse. There isn't a single being in existence that can stop him in this form, but he can only keep this form for 69 seconds. In this form, and only in this form, Sanic can use the power of two Infinity Gauntlets (if he already has them) to do whatever he wants, including increase his time left as IBOS to any amount of time from an extra second to 2 years. When he finally loses his transformation, he will use the strongest MLG >9000 Blast possible, destroying anything and everything he wants. If he has two Infinity Gauntlets, they will increase the power of his MLG >9000 Blast by Infinity times 2, making it powerful enough to destroy all of existence itself. The only possible way to defeat him is to snap him away with an Infinity Gauntlet, but that is only if he doesn't already have two Infinity Gauntlets already, in which case there is absolutely no way to defeat him, until he loses his transformation. He also has a Dark form a Light form.

Chaos was unimaginable, the only reported time Sanic went into Infinitely Beyond Omnipotence Sanic form. There are no records of what happened during this war though. Some say the Illuminati covered up the act, others say Sanic wiped out everyone out of existence with a single spin.

Sanic has no family, as when he was born his superior dankness wiped out everyone unworthy of his dank. He also likes Chili beans on Pizza but hates Chili beans on hotdogs. Sanic also fought during the Sega War, but was never Honored.

Sanic.EXE is a younger cousin of Sanic. He can do everything Sanic can do with only half sweg but 2x creepiness. His eyes are always bleeding. He is very creepy. We are not sure if he has any friends... 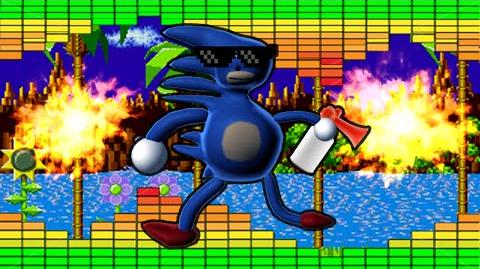 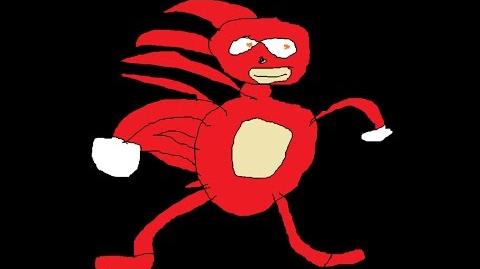 Sanic cameo in the 2020 Sonic movie.
Community content is available under CC-BY-SA unless otherwise noted.
Advertisement