Follow wiki guidelines, edit, be kind, if you're blocked DON'T COME BACK (Only if inf blocked), and NO MR INCREDIBLE PAGES

Teh Meme Wiki
Register
Don't have an account?
Sign In
Advertisement
in: Article stubs, Articles in need of cleanup, Memes,
and 3 more

View source
watch 01:36
We're Getting Mutants in the MCU - The Loop
Do you like this video?
Play Sound 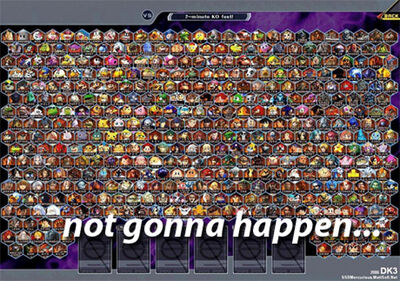 Super Smash Bros. is a best-selling fighting game series produced by Nintendo featuring characters from several of their hit video games. The first game in the series, Super Smash Bros. Was introduced in 1999 for the Nintendo 64 and was followed up by Super Smash Bros. Melee which was released on November of 2001 for the GameCube. When Melee came out, the character roster was doubled (which became crucial to the development of the Fake Roster meme). When Super Smash Bros. Brawl was announced to be in development in a pre-E3 2005 press conference, like a domino effect, it was expected by many fans that Brawl would have double the amount of Melee’s characters, so thus, the memes were born.

The meme had started some time after third-party characters such as Solid Snake and Sonic the Hedgehog were introduced as characters in Brawl. The video game characters that people could think of as possible fighters didn’t have to center around the Nintendo franchise anymore. Popular possible choice characters for Brawl that were not in the game include Megaman, Geno from Super Mario RPG: Legend of the Seven Stars, Krystal from the Star Fox series, Phoenix Wright, Leon Kennedy from the Resident Evil series, Sora from the Kingdom Hearts series, and several others. This soon rapidly expanded into outlandish characters such as Goku from Dragon Ball Z, Shrek from the movies of the same name, and others.

It mainly tells about the most wanted smash ultimate characters such as Geno, Shrek, Waluigi, and Goku from Dragon Ball. The meme becomes more and more popular as none of the characters they want are getting invited, just ones such as Banjo Kazooie, Terry (Fatal Fury), and Joker from Persona 5. Joker wasn’t even from Nintendo, so people decided to want other non-Nintendo characters. Now Masahiro Sakurai has cared and has added Steve and Alex to smash bros.