"Surely we all know the Longcat, the beautiful cat of immeasurable length, was considered the undisputed king in extent across the internet ... But recently something happened that nobody expected, among the constant stream of horrors and monstrosities that throws the infinite network, we reached a disturbing picture".

Tacgnol, a cat too long, How long?, Do not know, but some go so far as to compare its size with the very Longcat, many refuse even to think that a cat could become longer than Longcat, is blasphemy! The truth is that unlike the benevolent cat long tacgnoL is evil, this is clearly evident from his dark hair and devilish eyes, window to the horrors that this animal may have on the network. A small group tacgnoL sees a sort of balance with the cat for long, together form a Ying-Yang feline long it would maintain a balance in the network ... Shortly after the first appearance of the image of tacgnoL, find another image, which seems to bolster the theory that two cats, both Longcat as tacgnoL since the beginning of the network have been there to balance it and allow the constant flow of data ..."

In a few hours, the prophecy will be complete.

Within minutes, replies started flooding into the thread as Anonymous prepared for what was expected to be the greatest Caturday in history. Several names and stories on how this cat came to be were suggested in the original thread. Tacgnol was chosen because it was the polar opposite of Longcat (Tacgnol = Longcat backwards) along with the story that these two cats have been forever locked in a battle of epic proportions. The original thread quickly reached the Bump Limit and dozens of new threads popped up with the same image.

it is profocised dat oneday tacgnoL will destroy the world along with Basement Cat, Tacnayn, and Cathulhu. 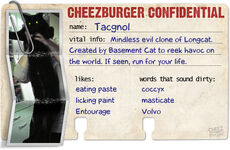 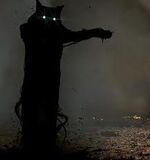